Gulliver turned 4 last week and his birthday party was held on Sunday.  It was an epic party because of the work his Mum and Dad put into it but also because of the weather - so windy and cold but little Darth Vader (in the front of the photo) had a great time with his friends and cousins. 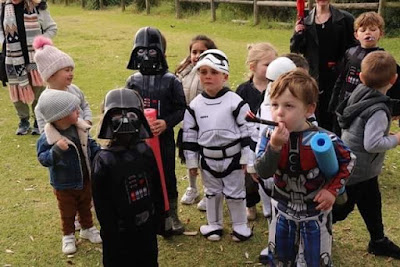 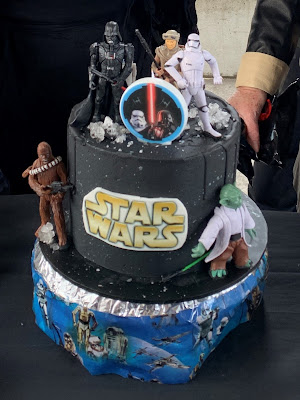 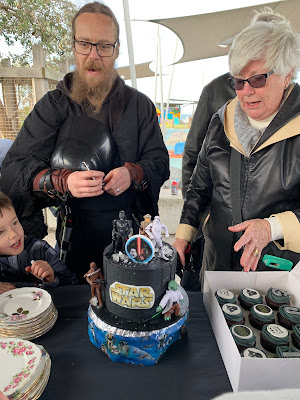 Michael, Peta and Gulli made some papier mache Tie Fighters and one was a pinata.  They brought along pool noodles for the party-goers to make into light sabres. 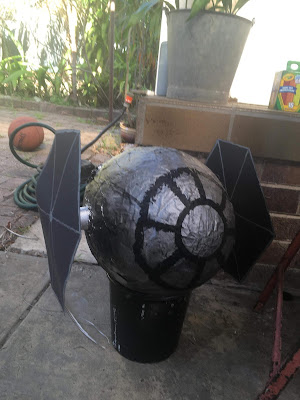 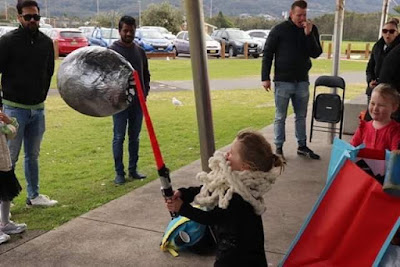 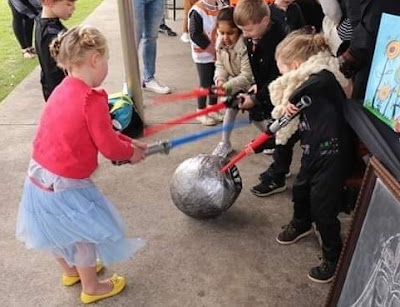 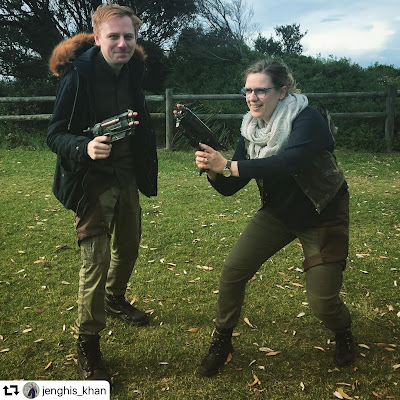 Even Nanna dressed up 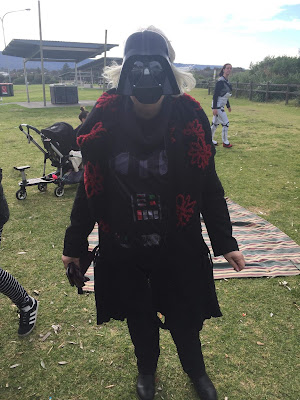 and GG was using The Force. 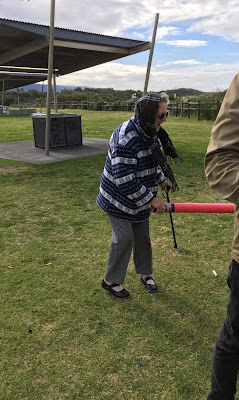 Towards the end of the party there was a huge battle with two left standing. 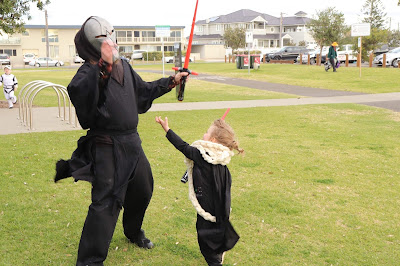 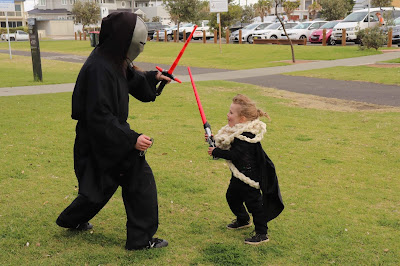 Michael had a ball playing with all the kids and Gulli had a birthday party he'll always remember.
Posted by Lynda at 8:30:00 PM 2 comments: 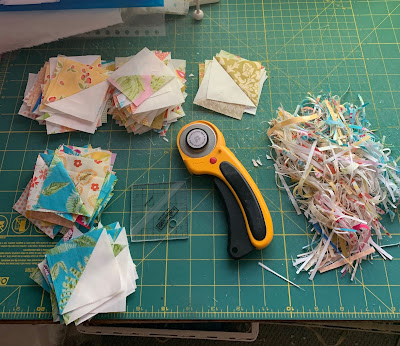 and laid out charm squares for another "Bradley Street" quilt using these new "Safari Life" fabrics I bought from Karen.  They will make a fun cot quilt. 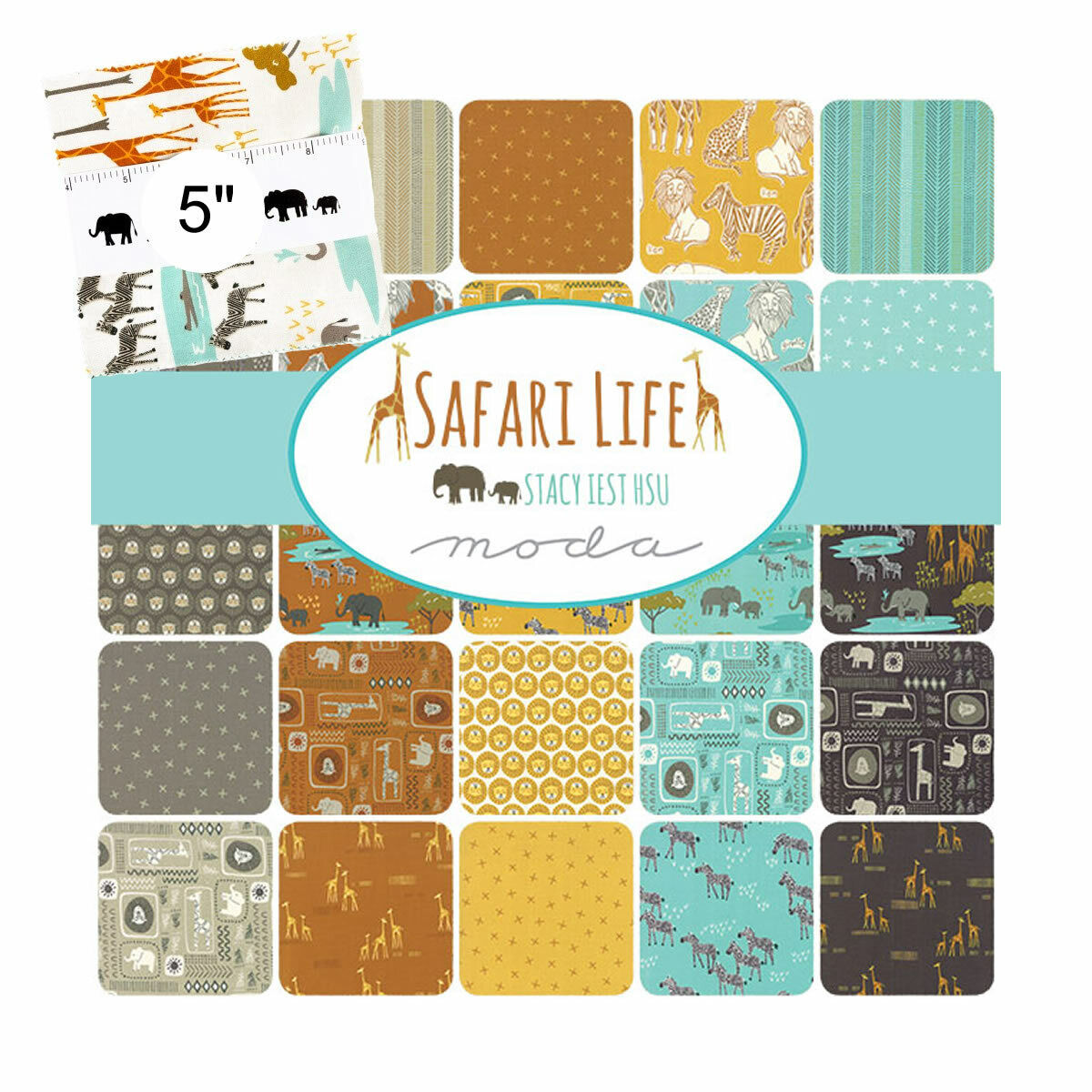 The rest of my spare time I've actually been stitching blocks for the newest Sweetheart's quilt - running very behind on this one as he's almost four months old.  Three large and two smaller stitcheries to go.

On Saturday night, along with Tania and her son, I went to see "Sweeney Todd" starring the wonderful, superstar Anthony Warlow.  Could never say that this is a favourite musical (Sondheim's music is always so jarring - I was hanging out for a nice melody) and the subject matter is so very gruesome, but Anthony Warlow was sensational.   Lynell, Robyn and I have tickets to see him in "Jekyll and Hyde" in November and I'm looking forward to that show - it's a one-off concert version in Sydney.

Yesterday afternoon Mum and I went to the pictures to see "Red Joan" - I enjoyed this suspense movie.  Judi Dench is always good value.  Looked up the real "Red Joan" afterwards - she was much more involved in espionage than depicted in the film.
Posted by Lynda at 9:00:00 PM 2 comments:

In November 2015 I went to a quilt camp in Tasmania with a bunch of friends.  Earlier in the year American Patchwork and Quilting published a quilt designed by Lissa Alexander from Moda Fabrics and I thought it would be a great quilt to chain piece at camp.  This quilt was a great scrap-buster, using 1-1/2" and 2-1/2" squares. 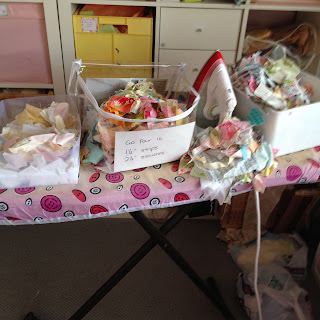 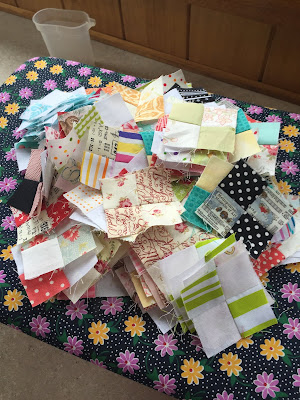 and some were sewn into nine-patches so I could see how the quilt would look. 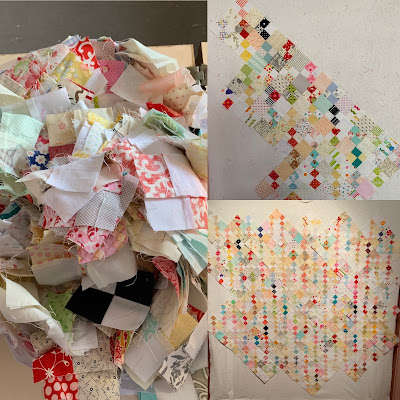 These were put away for over three years until I was supposed to be doing some sewing for The Wedding, and I took out the packet of blocks and decided to finish the quilt top (I am the queen of procrastination). 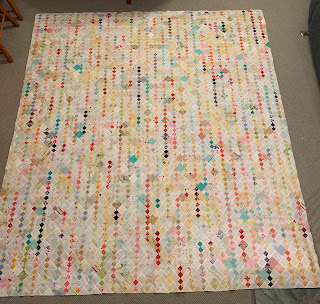 I decided to add a border - no points to worry about when sewing on the binding, 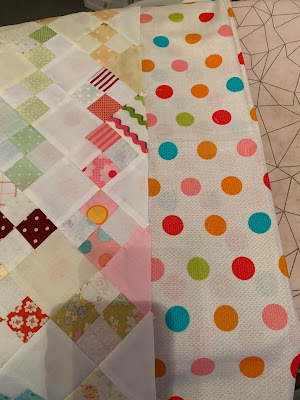 and the quilt was sent off to Sarah for quilting. 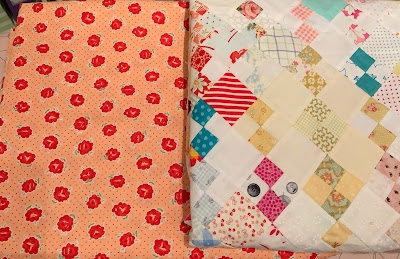 The binding was stitched down last week and the quilt was finished. 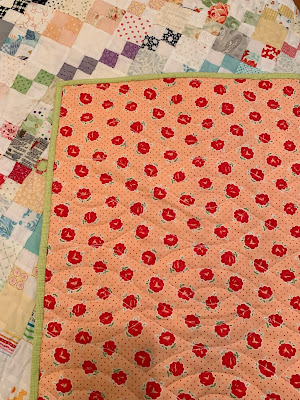 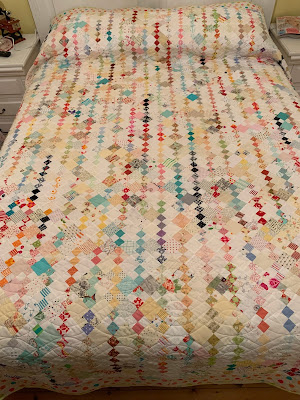 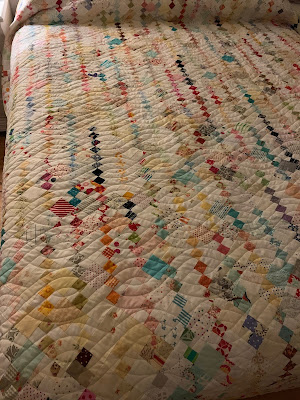 We've just had a long weekend and it was a fun time with family.  ChaCha had two sleepovers (second one because Jenni and Kurt were also having a sleepover), also spent time with Gulliver, Mum and I went to see "Rocketman", Sunday lunch with the family and Monday was a lazy day with a bit of sewing and cutting out.

Loved "Rocketman" so much - from the first scene when Elton, wearing a fabulous orange costume with huge wings, pushes open a set of double doors, I had a smile on my face and knew that I would love the movie.  There is a lot of sadness in the movie but overall it's a story of triumph for this musical genius.  Taron Egerton is fantastic as Elton and so is Jamie Bell as Bernie Taupin.

I sewed some more "Happy Scrappy Baskets" yesterday - am now halfway and need to trim some more HST's before I can continue. 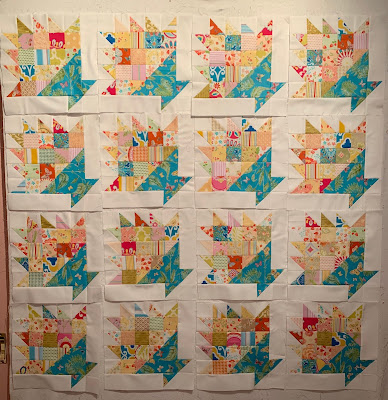 I also cut out the white strips for "Sweet Escape" - not quite in the mood to start sewing this one. 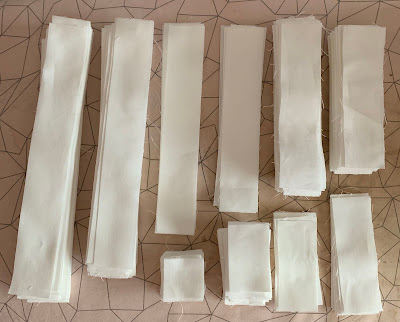 During last week I made another "Christmas Cheer" row - Friendship Stars. 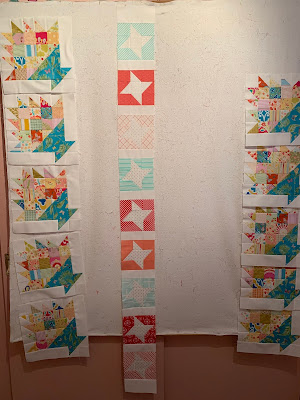 Picked up the new car last Monday - was sad to hand over the other car but am enjoying driving the new car.

Looking forward to next Saturday night - going to see "Sweeney Todd" with Anthony Warlow and Gina Riley AND I've managed to buy tickets to see Anthony Warlow in a concert version of "Jekyll and Hyde" in November.
Posted by Lynda at 8:00:00 PM 3 comments:

Not much to show this week.  The Pinwheel nine patch blocks for "Spinning Stars" are finished so these are ready to be added to the Sawtooth Star blocks and sewn in to a quilt top. 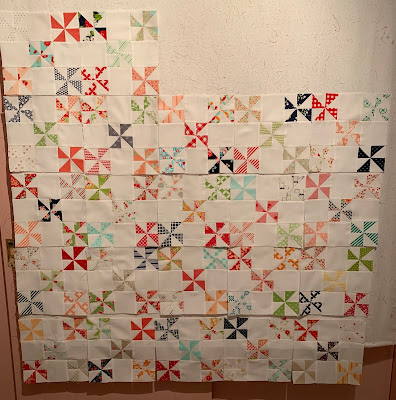 Now I have three piles of blocks to be sewn into quilt tops:  "Spinning Stars", "Fresh" and "Nine Patch Waltz".

"Happy Scrappy Baskets" are slowly multiplying - 10 are finished, so another 22 to go.  Will have to do a load more trimming soon as I had trimmed enough pieces for about half of the blocks.

"Go Four It - Rainbow Rows" binding is being sewn down - hope to finish that tonight.

Definitely looking forward to the long weekend - I'm taking Friday off to run a few errands and make the weekend extra-long.  Will be spending much of the time with family and hope to see "Rocket Man".
Posted by Lynda at 8:00:00 PM 2 comments: