A Change of Pace

There has been so much in the news lately about BlueScope Steel's Port Kembla Steelworks, the Western Port Works, redundancies, plants closing etc.  Not all of the news is doom and gloom.  Friday, 28 October 2011, is a big day in our department.  8 people will be leaving/retiring - me included.  I've been working there for 22-1/2 years and I leave with very mixed feelings.

I have known for quite a while that I will be leaving work tomorrow and I managed to hold myself together until Eva came to visit me at lunchtime - as soon as I saw her she started crying and then I was, then others joined in.  Emotionally, tomorrow will be a big day and tomorrow night our whole department is going out for dinner - my family is coming along too, so that will be even more emotional.

I work with such a wonderful group of people and will miss seeing them each day but, on the other hand, I am excited about having a few months off before looking for some temp work.  I think temping is the way to go for me as I'm not sure that I want a full-time job with lots of responsibility.

I would really like to make a big dent in the fabric stash during my time off.
Posted by Lynda at 8:54:00 PM 13 comments:

﻿﻿A year ago I finished off a stack of baby/cot quilts that I'd been making to try out a few different designs.  Michael and Peta's friends had a baby boy in August and they gave him the Bento Box quilt.  He is such a beautiful baby.

﻿For my birthday a few months ago, Diann gave me a book called "X Blocks" and the X-block ruler.  I had a play with them on Sunday using some of the left-over cot quilt fabric and a yellow stripe.  The designs able to be made from simple 9-patch blocks using colour placement and the ruler are fantastic.
﻿
The cut-off pieces are used to make a border.﻿  Very clever.

I also started another cot quilt using the left-over Teddy Bear fabric plus a couple of other fabrics from my stash.  This pattern is based on Joanna Figueroa's Petite Fleur quilt design.
﻿
Lots of chain piecing for both quilts so they are made up quickly.
Rest in Peace Marco Simoncelli.
Posted by Lynda at 7:53:00 PM 7 comments:

Monday was Steelworks Picnic Day so The Girls came to play.  I made quiches for lunch, Sharon brought salad (and flowers) and Karen brought sweets.
"Hot Cross" from Carrie Nelson's "Schnibbles Two" book, using a Bliss layer cake I'd bought from Bec, was my sewing for the day - the fabrics have been cut out for months and this quilt was a great choice for easy piecing while chatting etc. 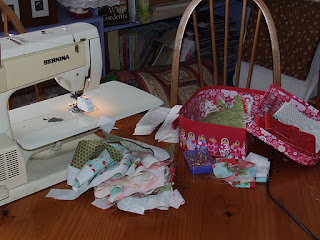 I didn't take any more photos during the day - forgot.  Sharon was busy hand-stitching, Kerryn was sewing blocks for her raggy flannel quilt (her first quilt) and Karen made this bag - it looks great and she's started her Christmas present stash.

I kept sewing on Monday night and finished off the blocks.  Trimmed them up last night and put them on the design sheet - not 100% sure of the layout yet.  LOVE the Bliss fabrics and think this quilt will be lovely when it's finished.  Once the blocks are sewn together I'll add a small white inner border, a wide outer border in the aqua floral and red binding.  I'm giving it to Michael and Peta - I think Peta will love it.

We had a lovely day and look forward to another sewing day soon.

A girlfriend and I went to see "The Cup" last night - wonderful Aussie movie.
Posted by Lynda at 12:14:00 PM 8 comments:

It's been a big week for finishes.  The binding this quilt was completed on Friday night and made the pillowcases yesterday morning.
﻿﻿ 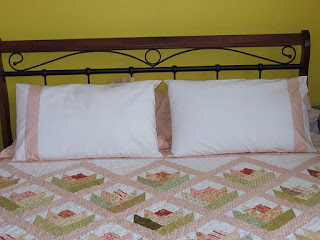 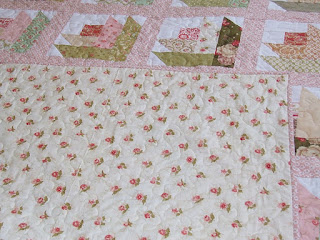 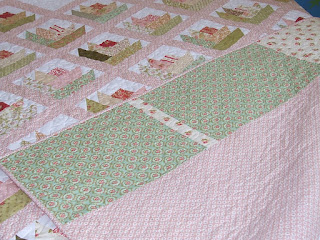 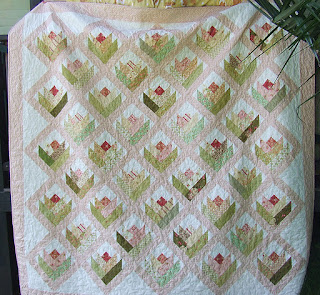 ﻿﻿The girls in our Tuesday night stitching group also made/are making this quilt - they are all beautiful.
Posted by Lynda at 12:15:00 AM 8 comments:

The Pirate Quilt was started a few months ago, the binding was finished on Thursday night and I made the pillowcase on Friday night.  This is for Michael and Peta's Godson.  They can decide whether to give it to him for Christmas or his 3rd birthday in February. 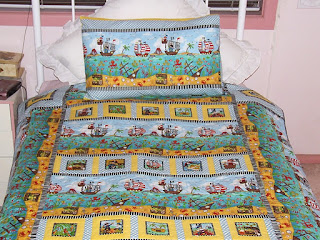 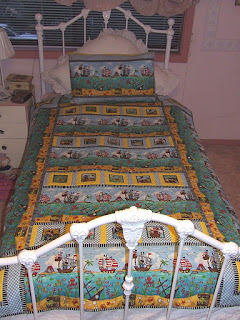 I loved this fabric as soon as I saw it and knew it would make a wonderful quilt for a little boy. 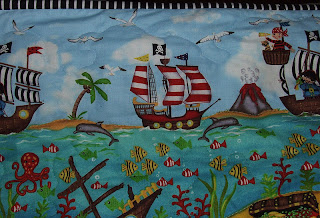 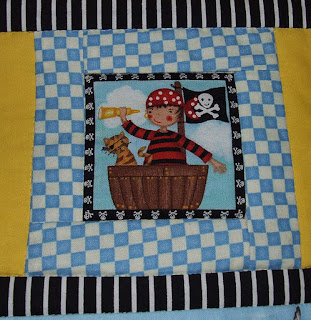 How cute is this gift bag that I found at the local $2 shop?  Perfect size for the quilt. 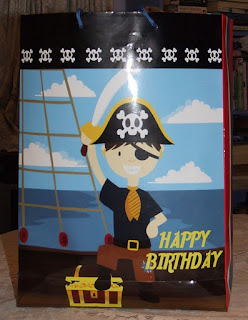 Yesterday was a great day for pin basting and Butterfly Garden is finally ready for quilting - started this morning. 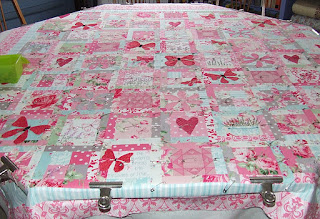 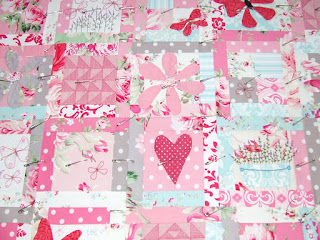 This weekend the Moto GP is being held at Phillip Island.  In 1988 the first Australian Moto GP was held at Phillip Island, Victoria.  John had recently purchased a Suzuki Triton with a sidecar and decided that he and Michael, who had just turned 6, should attend this momentous event in the hope of seeing Wayne Gardner (local Wollongong boy) win the inaugural GP.
﻿﻿I was most unhappy about my baby boy going all that way in a sidecar!  John built a canopy with windows for the sidecar, added a seat belt and Michael was quite cosy in there with his books, food, drinks, pillows, blanket  etc.  Anyway, they made it to the GP, had a fabulous time and Michael has a wonderful boyhood memory of a special time with his Dad at an event in Australian motorcycling history. 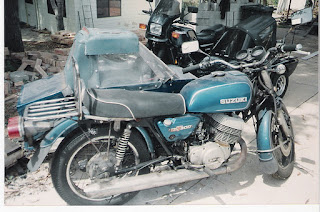 On the way home the bike broke down near Eden so John's Mum and Dad loaded up the bike trailer at our place and drove to Eden to pick up the weary travellers and the bike from the Eden Pub, where they'd been staying/waiting since the breakdown.  I'll never forget opening the door early in the morning and there was my gorgeous little boy home safe and sound.

John turned 60 in April this year.  His present was a ride day at Phillip Island - we are hoping to take his racing bike down there in the next few months.

PS:  Wayne Gardner won the race and he won again the following year.
Posted by Lynda at 11:22:00 AM 3 comments:

Email ThisBlogThis!Share to TwitterShare to FacebookShare to Pinterest
Labels: Family

... from the same book and my knitting is done for this year.  All the trips we've had to Sydney in the last few weeks have provided lots of knitting time.  Same pattern as my green cardigan and with a flower brooch.  This cardigan is for my friend at work. 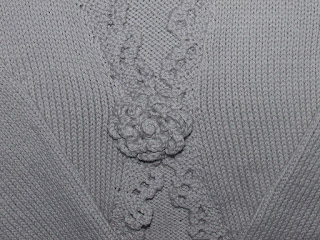 The Pirate Quilt is quilted, binding is sewn on and half of one side is stitched down.
Last year I knitted some baby clothes and they're in a bag in the sewing room ready for sewing up - hoping to have one of the little outfits sewn up in the next few days to give to our friends Phil and Louise for their first grand-baby (a little boy) is due in a week.  Very exciting times for them with No 1 Daughter being married recently and their grand-baby arriving any day.
Posted by Lynda at 6:52:00 PM 7 comments:

Email ThisBlogThis!Share to TwitterShare to FacebookShare to Pinterest
Labels: Knitting

The finished pieces for this cardigan and flower brooch have been on the back of the couch half sewn together for over a month.  Finished the sewing last night and crocheted the edges.﻿﻿
﻿ I'll be giving the cardigan to a girlfriend when I see her on Tuesday. ﻿
Having a bit of a knitting craze (in amongst quilting) at the moment before summer hits.  Am about 2/3 the way through another cardigan - the same design as the green one I knitted for myself a couple of months ago.﻿  This will be a present too.  Many years ago I used to knit year-round with the fan blowing in summer, but not these days.  Stitcheries tend to take over in summer.

Another rainy weekend on the South Coast.  Time for some maintenance at the hairdresser then, hopefully, some more ditch-stitching on The Pirate Quilt before knitting while watching the last episode of "Monroe" - hope we see some more of this show.
Posted by Lynda at 9:31:00 AM 6 comments:

Email ThisBlogThis!Share to TwitterShare to FacebookShare to Pinterest
Labels: Knitting 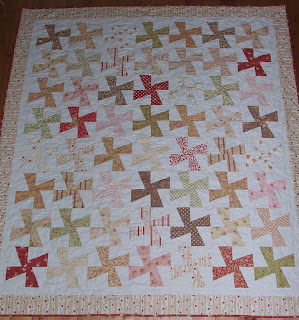 This quilt top was made in January 2009 using 2 charm square packs and some extra fabrics in one of my all-time favourite ranges - Fig Tree's Patisserie. The quilt top has stayed in the "to be quilted" pile until a few days ago when I put it on the frame and finally got around to quilting it.

﻿Our weekend plans changed a bit due to the amount of rain we received, so Sunday night was spent sewing down the binding - brick red background rose fabric from the Patisserie range. The backing is mostly a green floral/stripe fabric from Fig Tree's Mill House Inn range with a pieced corner of a variety of Fig Tree fabrics. 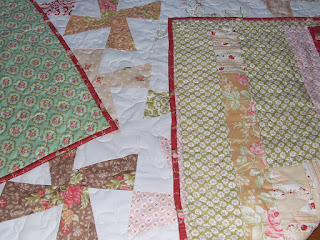 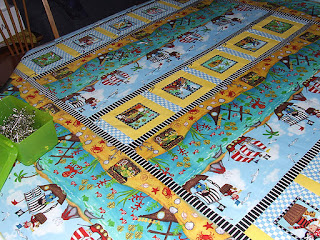 ready for lots of ditch-stitching. 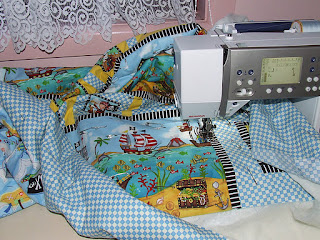 Jenni and I had a lovely trip to Ikea on Saturday - didn't buy too much that wasn't on the shopping list - and dinner out with the family last night at a Lebanese restaurant was very enjoyable - no belly dancer this time.
Posted by Lynda at 6:42:00 PM 10 comments: 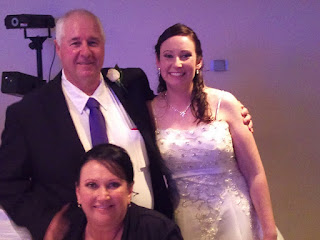 Melissa's wedding was such a happy celebration of a wonderful occasion as well as joy and relief that Louise is going to be ok.
﻿﻿﻿﻿﻿﻿﻿﻿﻿﻿I'm having lots of trouble uploading photos through Blogger or Picassa at the moment - not sure how to resolve the problem (as I'm not sure what the problem is).
Posted by Lynda at 8:27:00 PM 3 comments: